Meat reduction targets and scenarios – where are they?

Posted on November 4, 2014 by Kristian Petrick | Leave a comment

The following post will not discuss animal rights but meat production and consumption – an issue which is of enormous importance given the billions of suffering and slaughtered animals.

The problems and the unsustainability of meat production are widely known and part of the political and societal debate (high greenhouse gas emissions, soil and water pollution through nitrogen compounds, land use change, animal suffering and negative health  impacts). If climate change and all the other negative effects were taken seriously, it would have a major consequence: Meat production and consumption would need to decrease drastically in the decades to come.

But it is striking that there are only very few studies that show target scenarios which reflect the necessary downward curves for meat production and consumption and the impacts and potential benefits. There is also a lack of comprehensive studies on policies that could be applied to get on the path of those reduction scenarios.

One of the rare examples is a study of the German Thünen Institute which calculated two scenarios in order to reach the German emission targets for 2050 (80‐90 % reduction below 1990 levels by 2050) by applying a 50% reduction target for the agricultural sector.[3] The required livestock reductions – given for two different scenarios – are staggering as can be seen in the following Figure: 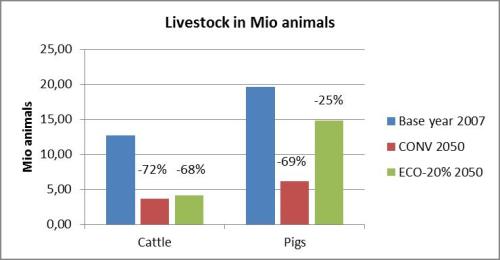 These numbers only show the necessary production decrease (a reduction of over 3% per year would be required between 2014 and 2050!) to reach the greenhouse gas emission target. Actually, if consumption was according to the guidelines of the German Society for Food (DGE), the production could be even lower (provided that meat would not be produced for exports instead).

The lack of studies and meat reduction asssessments means that policy makers are actually “blind” given the few information and data which could guide them towards strategies for a decreasing meat production. The “blindness” may result in negative consequences for local and global ecosystems in the short, mid and long term.

In contrast, in the field of energy a large number of studies have been developed in recent years showing even 100% renewable energy scenarios, something that was considered utopian not even ten years ago. An example of such a scenario is the one from WWF/Ecofys[4] shown in the figure below: 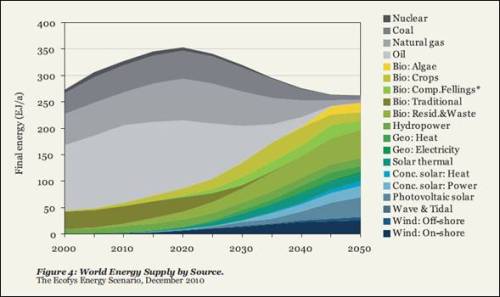 An important point in these scenarios is that fossil energy production (similarly to the meat production) show a downward trend at a given moment.[5] Those scenarios have helped policy makers, industry, researchers and the society that there are alternatives to an ever-growing need for fossil fuels. They are also indispensable to define objectives and trajectories for future energy production.

Therefore it is time to develop alternative meat production scenarios using similar methods as they are being applied in energy scenarios and drawing comparable policy conclusions.

An example of a possible target scenario and its annual development is shown in Figure below (own elaboration): 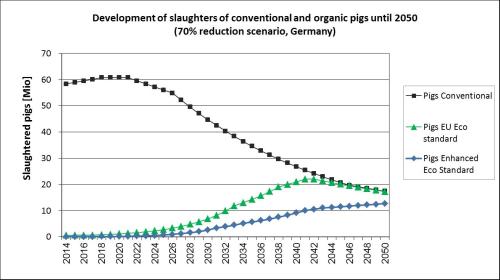 In this scenario the conventional animal farming can be compared with fossil fuels while organic animal farming would be similar to renewable energies. It is clear that this analogy holds only to a certain extend because animal rights are also not ensured under organic conditions. So even if all animals were raised according to organic standards – meat production would still have to be further reduced (or better: abandonded) in the long term.

For any alternative scenario and the various policy paths that are imaginable to achieve them, a comprehensive assessment of their impacts on emissions, trade flows, prices, rural structures and economic activities, subsidies, jobs, soil, water, etc. would be needed in order to anticipate to the extent possible future developments.

In the next months a German Foundation may take a first step in developing a target scenario  and showing impacts of certain policy measures.  As I have helped to define the Terms of Reference, I may stay involved in this project.

But apart from this initiative, it is crucial that policy makers take on the task to commission studies for meat reduction scenarios, to use the results in order to set binding targets and implement policies to achieve them. We have to get serious about it if we want to end the abuse of domesticated animals.

[1] FAO projections foresee an increase in per capita meat demand in developed countries by 24 % between the base year and 2050 (see Grethe “How to feed the world’s growing billions” p. 54).

[5] It is important to emphasize that scenarios are not predictions; they are based on models which are fed with different assumptions. For information on how to interpret scenarios (with a focus on the energy sector), see IEA-RETD 2013: A Decision Maker’s Guide to Evaluating Energy Scenarios, Modeling, and Assumptions (RE-ASSUME ) http://iea-retd.org/archives/publications/re-assume